You Fight When it Matters – Once Upon a Time – Winter Finale 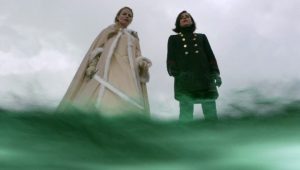 The winter finale finally told us who the hooded figure is. We also got to see what life would be like if the dark curse had never been enacted. We set up more of the conflict for Rumple and Belle but still haven’t solidified what The Evil Queen’s story is actually about. And we seem to have completely thrown The Land of Lost Stories characters to the side.

The episode opens with the group trying to find away to go after The Evil Queen again. During a small fight between Regina and her darker half, Emma takes a swing at The Evil Queen with the sword they found in the last episode. It is quickly discovered that the sword can hurt the queen but it doesn’t hurt Regina. They now have a weapon! Though who the sword belongs to and why it hurt the queen and not Regina is left as unanswered questions.

The group goes after the queen but she takes Jasmine hostage. She now has possession of the lamp and she uses it to send Emma to a world where she is not the savior. She is hoping to put everyone against each other as they try to find a way to save Emma and leave The Evil Queen to whatever she wants.

I still have no idea what this woman wants. She wants to hurt Regina, that much we know. We know she wants to watch the people she hates suffer. She thinks taking away all the people from Regina will destroy her. What I am confused about is what happens after that? What is her long term goal? If Regina loses everyone and falls apart then what does she want? Will she go back to the Enchanted Forest? Will she rule Storybrooke? What does she really want?

Emma ends up in the Enchanted Forest in a life where she was raised by her parents. We see right away that she is not a fighter. She has been coddled her whole life and she has no idea what suffering feels like. She is taken care of by her parents. She is loved by her people. Her life has been almost perfect.

Henry is still her son and she did end up with Neil, though I am not sure I understand how that worked out. In the actual storyline, Neil ends up in the mortal world because Rumple pushes him away. We know that Rumple is still The Dark One in this world so why didn’t Neil end up in the mortal world? How was that changed because the curse didn’t happen? Those two things had no connection to each other.  I  feel like this was glossed over to shoehorn Henry into the story.

Regina ends up figuring out that since her and The Evil Queen are essentially the same person she is also the master of the lamp. She takes it and wishes to be where Emma is. The only problem in is that in the new reality she is still seen as a villain and feared. No one knows her as Regina so she has to play a part.

Regina is desperate to turn Emma back into the woman who will fight for what she loves again. She takes her parents hostage and threatens their lives. She tells Emma she just has to fight her. Emma instead offers up the kingdom to save her parents. This Emma has no idea what fighting means. She has no idea how to give herself up for people she loves. She is not someone who will do anything for her family.

Our Emma has had to fight for everything from day one. She has not had anything handed

to her. She knows loss and she knows pain. This Emma knows none of those things. She has never been in real pain. She did lose Neil but she hasn’t watched people die at her feet. She hasn’t had someone take someone she loves. So, she has no idea what to do when Regina takes her parents; other than to hand over everything.

It takes Henry stepping in front of her and fighting for her to snap her back to herself. No matter what form she is in, she will do anything to protect her son. He is what matters in her life, anywhere and anytime.

They make almost make it back to their reality but stop when Robin shows up and catches Regina’s attention. She has been spending her whole time there saying that this place is not real. All of it is just an image, not real life. Then Robin shows up and her mind goes off track. She sees Robin, someone she thought was dead forever and she can’t walk away.

The second half of the season is going to have Regina coming to terms with losing her Robin; because this is not the man she loved and lost. She is going to learn to let him go and go home to her real life. I’m sure somehow he will help her find a way to fight the dark side of herself and win.

The other part of this episode was about Rumple trying to find his son. We find out that the Blue Fairy was attacked by the Black Fairy and their son was stolen. In the last moments of the episode we learn that the hooded figure is Morpheus, their son.

The Black Fairy has turned him evil/dark. Now Belle and Rumple are going to have to work together to save him. My question though is, will Rumple see the situation the same as Belle? Rumple likes his dark side. He has been wanting someone that understands him. Now, he has his son. Will he actually help turn him good again? Will that help him realize that his thirst for power is what is destroying his life?  Will saving his son help save Rumple?

“Love is weakness” – Evil Queen – We have heard a number of villains say this before. They are afraid of love because it makes them vulnerable. They would no longer be centerd on themselves. But in the end it also makes everyone stronger, because they are able to fight for the people around them.

“Every savior needs a villain.” – Rumple – Saviors need something to fight against. The villain doesn’t have to be a person, it is just an obstacle in the way. Saviors are saviors because they are able to stand up and fight for who and what means the most to them.

“You fight when it matters.” – Regina – Emma fights when people she knows are in harms way. She does not fight to fight. She fights because it means saving people she loves. That is when fighting matters the most; when you use it to help others.

How will Emma and Regina get home?
Can Regina leave Robin Hood again?
Will this Robin Hood be anything like hers?
How did Rumple is the wish reality know about Storybrooke?
What consequences will there be for realizing Rumple is the wish reality?
Will we see the Black Fairy again?
Why did she steal Rumple’s child and turn him dark?
Can Morpheus be saved?
Where is Agrabah?
How is that story going to fit in with the rest of the stories?
What happened to the people from The Land of Lost Stories?
When will we get the story of Charming’s dad?
Who does the sword belong to?
Why can the sword hurt The Evil Queen and not Regina?

Posted in Once Upon a Time, Tv Shows