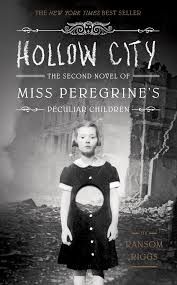 (This being a review of a sequel there are some minor spoilers for the first book in the series).

I am not one of those people who can read the first book in a series then a month or two later read the next one. If I start a series, enjoy it and the rest of the books are available, than I will finish it. I loved the first Miss Peregrine’s book, which meant I had to go out and get the rest of the series. The second book, Hollow City, was a good sequel. It expanded on the series; grew the world as well as gave us a deeper look into the peculiar children.

Hollow City takes place right where the first book left off. The children have all left the island and are on a mission to rescue Miss Peregrine. They are in the middle of the ocean and realize very quickly that this mission is going to be a rough one. This is the first time many of them have left their loop since they made it their home. On their adventure they learn more about each other and also learn more about their peculiar world. We meet peculiar animals and find out how desperate the whole situation truly is.

I liked that this book gave us a better idea of the vast nature of the peculiar world. There are many different loops, all populated by a number of different type of peculiars. I loved the idea that there are peculiar animals. Addison became one of my new favorite characters. To me this book helped integrate this peculiar world into the rest of the world. Both live side by side, sometimes not even realizing how they work with one another.

The peculiar children are in an interesting position. They are in children’s bodies but they are all almost a hundred years old. They have this interesting mix of adult ideals and thought but also the innocence of children. They grew up very sheltered in the loop. Miss Peregrine made sure to do everything for them. She watched over them and provide for them. They did not have to do much for themselves. So once they decided to leave they were thrown into this whole new world. They can think like adults but they also tend to see the world as a child does.

There is an interesting scene about 2/3 of the way through the book. In their quest to find Miss Peregrine and keep their world from being taken over by wights and hollowghasts, they encounter two sisters. The sisters are hiding from the bombs that are falling on London. They learn that the older sisters is peculiar. They ask her to join them but she is weary of them.

In the aftermath of the bombing the group is debating whether to steal a ambulance in order to get out of the area faster. The older sister is horrified at the idea. The group shows a callousness for others, mostly because they know where they are is the past. They see it all has having been done and gone. Nothing will ultimately change anything significantly. What the older sister sees is people who care about no one but themselves.

At the end of the chapter Jacob has a few lines of thought that are interesting. “I don’t know why it was so important for her [Emma] to prove to a stranger that we were good-hearted, when we knew ourselves to be – but the suggestion that we were anything less than angels walking the earth, that our natures were made complexly shaded, seemed to bother her. ‘They don’t understand,’ she kept saying.
“Then again, I thought, maybe they did.”

Jacob grew up in the world that the reader knows.We know that the world is one of blurred lines. Nothing is ever as black and white as we want it to be. People are a mix of light and dark and that is what makes us human. Jacob understands the tough decisions they are facing.  He knows they aren’t mosnters, they don’t want to hurt anyone. He is not that bothered by the exchange. The two sisters are unfamiliar with what they are trying to do. They don’t understand how difficult their lives are at the moment. He knows some decisions are tough and the choices made are not always the best ones.

Emma on the other hand has grown up seeing herself and her people as somewhat like heroes. They are good at heart. They do not harm others (though she is unfamiliar with what the children used to do in the village when they got bored). She does not want to admit that they may not all be good people. She does not want to see the dark that exists in peculiardom as it does in the rest of the world. They are not separate, they are just like us. I think that idea scared her.

I like this sequel because I felt a better connection to the characters throughout the story. I like characters were moral grey lines. I also like to watch them learn who they are and how they belong in the world. I am eager to finish the last book and see how everything wraps up.

What Are You Reading Wednesday -Hollow City 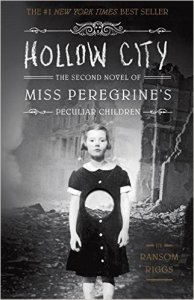 What are you reading Wednesday is a feature over at It’s a Reading Thing. It is pretty simple to take part, just answer the following questions about the book you are currently reading.

1.) What are you currently reading? – Hollow City – The second novel of Miss Peregrine’s Peculiar Children Series by Ransom Riggs

It occurred to me that it had very likely  saved us once already; without the fog those balloons would’ve spotted us hours ago, in our boats, when we’d had nowhere to run. And in that way, it was one last thing that the island had done to save its peculiar children.

3.) Would you like to live in the world that exists in the book? Why or why not?

I like the idea of living in a world where you could find peculiar people but it seems to be getting quite dangerous. At this point I would say no, mostly because I don’t think I could do what they have had to do to survive.

Posted in What Are You Reading Wednesday