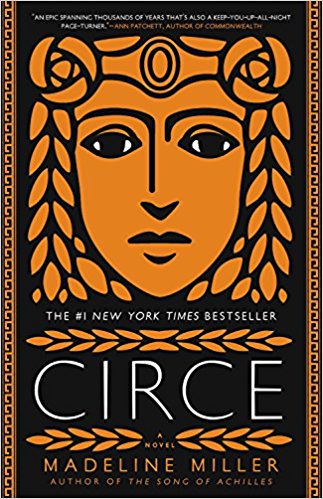 How much do you know about Circe? Only remember her as the one who turned men into pigs? Ever wondered what her backstory was? Circe was disgraced, cast out and forced to find a way to stand on her own two feet. She went from wishing anyone would see her, to hiding from the world to finding her place in the moral and immortal world.

I have stated in past reviews and posts that I adore mythology. Something about these past stories still speaking to us today pulls me in. I love learning about how ancient people tried to make sense of the world we live in. Take that love and give me a new way of seeing a character I have read about before and you have my undivided attention.

I know of Circe as the woman who turned men into pigs and that was all I knew about her. So when I saw this book popping up on blog after blog I had to give it a try and I adored it. I thought the way this book breathed new life into a character I knew next to nothing about and really didn’t care about, was fantastic.

I loved the progression of Circe’s character throughout the story. She starts off as someone who is left out. She is the unwanted child of Helios. She is not special, she is missing something. She does not stand out and no one sees her.

Throughout the book we learn how she was able to find a way to be true to herself. She didn’t need anyone to see her because she saw herself. She found purpose in her own life, in her own talents and destiny. She found her feet and she stood proudly tall. Her evolution was inspiring and great to read.

The writing of this book was lyrical. I fell into the words and they kept me captured throughout the story. The comparisons made were unique. I felt like I have never read a book quite like this one before. I never found myself feeling like I have heard the metaphors or similes used before. It swept me onward and through the the story and I wanted to read it not only for the story but for the way the words sounded in my head.

I also found it really interesting how Odysseus was portrayed in this story. I know him as this larger than life hero. He stands high and he is noble. He does everything he can to get home and take care of his wife and son. I saw him as this perfect man and this book gives us a different angle of this man who we thought we knew.

I liked that this story made Odysseus more human. He is flawed and we see that shine bright in this story. He is a man who will fight for what he wants and he kills whenever necessary. We see that darker side of him in this book, we see that he is not perfect. Through his story we get a look at PTSD in a character as well. The fact that this was explored without really naming it was interesting.

I also really enjoyed how this book explored bigger ideas that connect to us today. A good book can remark on our world without having to be outright blatant about it. You don’t have to give a lecture on rape culture to get your message across. Miller does a great job at commenting on real life events in a non-heavy handed way.

My only issue with this book was how it ended. I loved the progression of Circe but I thought we were cheapened by the end. It felt a bit rushed. I wanted to see the way Circe took that last step into becoming who she was meant to be. Everything led up to that point and then it happened in a matter of pages.

We really only get a summary of the last part of her life. I wanted more. I wanted to feel that final connection her and how she ended up.

There was nothing that threw me out of this story. I enjoyed the character development, the plot lines and the writing.

I gave this book five stars on Goodreads. I was enthralled the whole way through and am eager to read her other book, The Song of Achilles.

Quotes:
“Beneath the smooth, familiar face of things is another that waits to tear the world in two.” (pg. 16)

“Humbling women seems to me a chief pastime of poets. As if there can be no story unless we crawl and weep. ” (pg. 206)