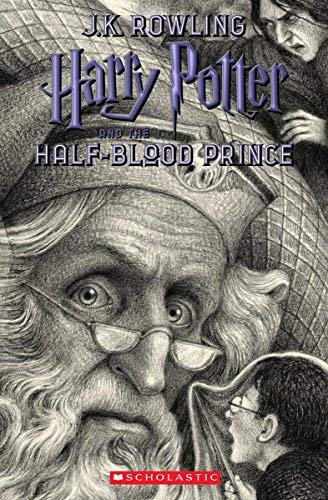 The reason the sixth book is my second favorite is because of the back story given to Voldemort. I am the kind of person who likes the villain of the story to have a story. I have a problem when the antagonist is just there to cause trouble but we never find out why. I believe a story gets stronger when we can understand why a person makes the choices they make.

The look into Voldemort’s past is fascinating to me. I loved seeing when he was as a child to the moment when he started figuring out how to become immortal. It is interesting because we see that he had several opportunities to turn around. We also got to see the resentment and anger that resided in him since he was a child.

When I first read the series I just saw him as this evil man who had no morals and no reason for doing what he was doing. In this book we got to see the reason. We got to see why he might have turned that direction. He was raised without any love or affection. He was forced to grow up quickly and take care of himself.

Now not every person who grows up parentless turns into a murderer (i.e. Harry) but this book gave  us a way to understand the man behind the evil actions. Part of me felt bad for him. I remember reading the first time feeling upset that he was left with this route. But then you look at Harry and see what choices he could have made.

Harry grew up without parents too and yet he was the complete opposite of Voldemort. Which then raises the question of nature versus nurture. Harry’s parents died protecting him, Voldemort’s abandoned him. Does that change things? Some very fascinating questions are raised throughout this story.

One of my favorite scenes is in this book. After Harry and Dumbledore look at the memory about the Horcruxes we get a speech that is very significant for this series. Harry doesn’t understand how love can be the power he has that will win him the final battle. He can’t see past what the prophecy says. He is stuck until Dumbledore makes him understand.

This whole speech is so interesting and important, not only for this story. Seeing Harry come to realize that his heart is what he has that has kept him whole his entire life. His heart and his love for those around him is what matters. Voldemort never allowed himself the ability to love. He closed that door when he was a child. Harry never gave up trying to find that comfort and love. He didn’t turn to the darkness for comfort. Instead he allowed people in, allowed them to take care of him when he needed it. We see what happens when you don’t give up, no matter the darkness that seems to surround you.

Dumbledore dying was the moment you realized that anything can happen. No one is immune and anyone can be gone tomorrow. I already knew this but this book hit that point home. The end makes you realize how important it is to say what you need to say to those around you.

Lastly I loved the very end of this book where Harry is trying to convince Ron and Hermione to allow him to search for the Horcruxes alone. Hermione reminds him that when they were in their first year he gave them the chance to turn back, to leave him. They decided to stay. Throughout five years they stayed by his side and they were not going to abandon him now.

The true power of friendship shown through this book. You see in this moment that those people who have stood at your side for years, through it all, are not going to disappear at the tough moments. If they had chances to turn back in the past and didn’t, then trust them to be there throughout it all.

What lessons have you learned from you favorite books?