← April Wrap Up
How I See Myself as Fictional Character Tag! → 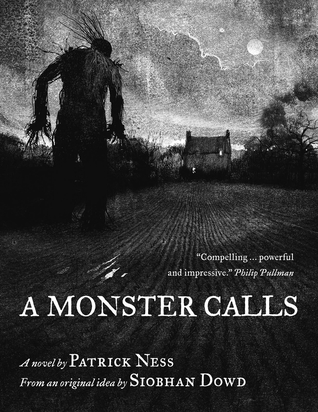 Connor’s life is in turmoil. Everyday is uncertain and he is beginning to become lost inside his world. He is expecting one type of monster to rampage through his life but ends up with a much different one. This one tells him he will tell him three stories in exchange for Connor telling him one.

Connor is apprehensive, not knowing what to expect from this new force in his life. As he hears each story he realizes how to deal with another part of his world. A world that is slowly crumbling and not even a monster can stop it.

I have heard about this book for a while. It was recently made into a movie and that sparked my interest further into reading it. I knew the atmosphere of the story.  I knew that Connor was dealing with his mother being sick and her inevitable death. I also knew that this was going to be a  tough one to read and I was not wrong.

The atmosphere of this book is somber and haunting. I felt like I was almost in a fog while reading it. I felt his somber air hang over me as I went through the story. Connor is trying to deal with his mother’s illness, his grandmother stepping into his life, his father stepping father away from his life and the rest of those around him tip-toeing around his every move. He is lost in a  fog of his own, trying to figure out what life will be like and I fell right into that same pit.

I knew where the story was going from the very beginning. You know that his mother is not going to beat her cancer. We know this is a story about dealing with that pain. I thought it was interesting how the monster tied into all of it.

The monster is a manifestation of all of Connor’s fear and frustrations. Each one of the stories is about him dealing with a piece of his life. Whether that is his grandmother and how he relates to her. Or his anger at the situation he finds himself in or the invisible feeling he has to those around him at his school.

I loved the way the stories were used to explore these ideas. One of the reasons I love books and stories so much is because they give us a way to see situations and the world around us in a new way. We get a chance to come to terms with things that can hurt or harm us. We come to term with ideas or feelings that are building up and that we can’t necessarily explain in a concise way. The monster’s stories did that for Connor. Gave him a way to deal with things he couldn’t otherwise deal with.

I also found the parts of Connor at school and how he is treated at school interesting. While he is at school his teachers and other students kind of treat him as if he is untouchable. They are all afraid of doing anything to him because they don’t want to hurt him. In the end they are shunning him, making him feel even more disconnected from the world that he already is.

I thought the way this idea was explored was done well. By trying to help they were actually hurting him worse because they left him no one to turn to. They didn’t want to upset him and yet gave him no one and nowhere to vent his frustrations and pain.

I also liked the addition of the pictures in this version as well. I thought the pictures really enhanced the story itself. They kept the atmosphere darker and most somber. It also helped me visualize the monster better.

I wasn’t a huge fan of the father’s character, which I don’t think we were supposed to be. I found it hard to believe that he would not try to be there more for his son. His son’s mother is dying and going to leave this kid all alone and he was barely there for him. He seemed more concerned about his other life while Connor was just a side issue.

Personally that bugged me because I have parents for who we (their children) are  their whole world and I could never see either of them doing that. I thought it made the father shallow but then again it did enhance the grandmother’s character. We saw how caring she was. When you juxtapose the two of them you definitely come out rooting for the grandmother and are thankful for her taking care of Connor.

I can’t think of anything that stood out as a real issue for me. The story flowed well. I understood what each of the stories were about and how they connected to the rest the situations at hand. I liked the metaphor of the yew tree and the monster itself. It was  quick read that was emotional, poignant and powerful.

I gave this one 5 stars on Goodreads. It was an emotional story that was told well and did the story matter justice.

“Belief is half of all healing. Belief in the cure, belief in the future that awaits.” (pg. 109).

“Stories are important. […] They can be more important than anything. If they carry the truth.” (pg. 141)

← April Wrap Up
How I See Myself as Fictional Character Tag! →