There is a place where forgotten books find a home. It is a secret bestowed on a select few. Once you are brought into the cemetery you are given a chance to chose one book. This becomes your book, you are charged with protecting it.

This series tells the story of one particular family, the Sempre family. They are booksellers, a family that understands the intrigue and power of books. A family that understands the importance of books and keeping them safe. The series is a tale of this family keeping not only their business alive but also finding ways to make connections with others around them. It is a tale of a family who gets intertwined in mysteries that change their lives forever.

I actually started this series backwards. I started with The Angel’s Game, not realizing it was part of a larger series. The Angle’s Game and the subsequent books had this deep air of mystery. You were always wondering what exactly was going on. Each book had its own mystery, one that slowly unwound around the reader.

I enjoyed the slow and steady pace of these books. Sometimes with mystery books there is a long drawn out hint at what is going on. Then at the end everything gets wrapped up in a few pages. This was different. The mystery unfolded piece by piece. We meet new characters and figure out what is happening. This pace is what keeps you reading, wanting to find out the exact details.

I also like that this whole series was around one family. I enjoyed slowly learning about them. We got different generations in the books. We saw the evolution of the family and the long term effects of events in the earlier books. I liked this connection that built on themselves throughout the stories.

I also enjoyed the air of otherworldliness in The Angel’s Game. This was the first one I read and I twas captured by it because I had this feeling something was happening under the surface. I liked this kind of floating feeling I had throughout the story. I had a theory and later learned I was right; but I liked that it was in another novel that I found out what was truly going on. This was what kept me reading this series. I wanted more of this atmosphere though unfortunately  that wasn’t present in the the other books. 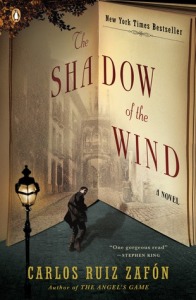 What I was just okay with:

I started with The Angle’s Game and found out that it was the second book in a series of three. When I finished The Angel’s Game I believed that The Shadow of the Wind would have taken place before The Angel’s Game, or at least have a solid logical connection it. That was not the case.

I struggled I think because I started The Shadow of the Wind with a certain expectation. When I realized it was not going to do what I expected it to do, I felt let down. I felt lost which I think took me out of the series.

If I had read the series in order maybe I would have felt differently about the series as a whole. But as the way I read them, I felt I was missing a vital piece to this story in the end.

What I wished was different:

I wanted to hold a true story but it felt like it could have been integrated into the other books. The last book felt unnecessary which left me feeling detached and disappointed by the series as a whole.

As a whole the series was alright. I gave it between 3-4 stars on Goodreads. I liked the mystery elements, I liked how it held me captivated but wish that the series felt better connected with one another. In the end I felt like the series could have been stand alone stories and it would have worked as well if not better.