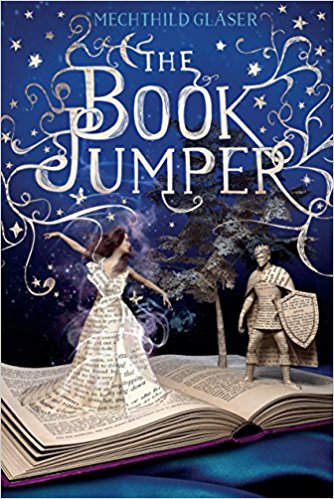 If you say you have never wanted to jump into a book you were reading, you are lying. A reader’s dream is to be able to jump into the pages of a story and live that story. I would love to be able to be apart of my favorite stories, even though many of the stories I love involve danger that I am sure would get me killed. The Book Jumper is a book that attempts to give the reader an idea of what that life would be like. It is an interesting take on the idea though I felt like it could have gone farther.

While on the island Amy learns that she comes from a line of Book Jumpers. They are people who, until the age of 25 (though why 25 is not explained), can jump into books and interact with the stories. Amy begins to learn about her new power. She meets fellow book jumpers and learns that there is something going wrong in the book world.

A thief is stealing the main ideas of stories and destroying the book world. It is up to Amy and her new friend Will to find and stop the thief before all of literature is destroyed.

The premise of this story was fun and immersive. I loved the way it was described. Though I was fuzzy on the mechanics, I could picture Amy walking from story to story. To me it appeared like a quilt where all the stories were knit together and you could just wander from one to another. I loved the idea of all stories being apart of one world.

I also really liked how the characters were portrayed in the story. The characters from the stories could wander into these in-between places or even each others stories. They were portrayed as people acting out their story but between scenes they could go for a drink or just have a general conversation with someone from another story. I thought this gave them depth. The characters felt more real and alive, as if they were more than just the stories they were apart of.

The overall storyline was interesting. I can’t give too many details because it would involve too many spoilers. The plot moved quickly and at a steady pace. We found out pieces at a time. There was never a huge information dump or a ton of things thrown at you at once. You got one answer, a few more questions, that kept you reading. I kept moving through the book because I wanted to know what was happening. The pacing made the story flow well.

While I enjoyed the pacing and the concept of the story I had trouble with the characters. I love characters and unfortunately I felt no attachment to any character in this story.

I thought Amy would someone I could relate to but she felt very generic to me. She was your typical “reader, nerd.” She sees herself as plain and not pretty. She is portrayed as someone who cares about books only and not other relationships, at least at first.

I have an issue with this portrayal of readers. I hate how people, especially girls, who love to read are always seen as people who aren’t pretty or don’t think they are attractive. It is like because they enjoy reading they can’t appreciate themselves and that annoys me.

I would have loved to see Amy as more confident. She loves to read, she sees the world as bigger than it is. She could have been portrayed as someone who has pride in herself and that pride could have grown as she learned her new power. She could have been someone who walked around with confidence in not only her way of seeing the world but her appearance as well. Just because she is a reader does not mean she has to be seen as plain or unattractive.

I liked Amy’s relationship with Will at first. At the beginning it felt complicated but then it fell into the “insta-love” hole. They started as friends helping each other but as they built their relationship, it became about falling in love instead of helping one another anymore. I felt like that aspect wasn’t needed. They could have had a new relationship but it didn’t need that falling in love plot line.

My biggest issue though was with the adults in the story. The adults on the island are in charge of protecting literature. They spend their lives reading books and making sure things stay as they are meant to stay. You would assume that they would be the first to notice when the stories start falling apart, but you would have assumed wrong.

Amy tries to tell everyone what is happening but no one will listen to her. They pass it all off as a joke between the characters in the books. All they would have to do is open one book and see how much things are deteriorating. No one will listen to Amy. I could not believe that not a soul noticed what was going on or cared. That kept throwing me out of the story because I kept asking how it was possible for these people to be so naive.

In all I liked the plot of this book, it was a fast and fun read. I thought it explored the idea well. I just wish it had done a bit more to explore the concept and made the adults a bit more believable.