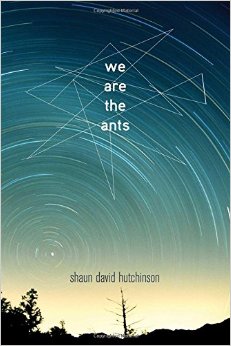 “If you knew the world was going to end but you could prevent it, would you?” This is the question that gets asked over and over again throughout we are the ants by Shaun David Hutchinson. If you had a chance to end life on our planet, would you? What would make you save the world? What would make you think that the world deserved to be destroyed? Do you get to make the decision based off your own life only? Should you take into account all the lives you would be affecting? This was an interesting read that didn’t seem like it would make you think, but ends up sitting in your head long after you finished the last sentence.

Henry is teenager, just trying to make it from one day to the next. His life is not one many would envy. His brother is constantly bullying him, his grandmother is falling further and further into dementia, his mother works as a waitress to barely keep them afloat, his father left them a long time ago and his boyfriend committed suicide about a year before the story starts. His life is a constant battle to find something worth living for.

For a while before the story stared Henry had been getting abducted by aliens. They never truly commincatue with him. They abduct him, do tests and then let him go. Everyone at school thinks him crazy, as does his family. The story starts right after he has been abducted and given a choice: he can either press the button they present him with and save the world or he can not press it and end the world. He is given until January 29th, 2016, 143 days, to make his choice.

We follow Henry as his strives to make his decision, to save the world or to let it burn. The part I liked most about this story was that as I read through I kept changing my mind whether I wanted him to push the button or not. At first I didn’t blame him for wanting to be done with this world, his life was not fun. He had little going for him, I understood why he wanted to give up.

As the story progressed and he rekindled an old friendship and found a new love interest I found myself wanting him to want to live. Though events kept changing that. Just as things started to work out, a wall came down and threw him backward. I liked that I didn’t know what I wanted him to do. I didn’t make a decision at the beginning and stick with it. I was like Henry, going back and forth between the options trying to determine what mattered and what didn’t.

One of the main themes of this book was the idea of finding a balance between the past, present and future. Henry is someone who is stuck in the past. He can’t get over his boyfriend’s suicide. He has no answer and that bothers him. He is also stuck on his fahter leaving and yet again having no reason for that event. He is someone who stays stuck in what happened and obsesses over what he can’t change. When he is given his option of the saving the world he can’t think of saving it at first because he can’t envision any future. The future is impossible for him.

On the other hand is Diego, someone who comes into Henry’s life. Diego is the opposite of Henry, he is obsessed with the future. Diego refuses to look at the past. It is over and done with and he can’t change it. He won’t acknowledge it, to either accept or deny it.

What everyone has to learn is that a balance is needed. You can’t forget the past. It teaches us things and reminds of what has happened before. We need the past in order to have a future. You also can’t fully live in the future because you then live in a kind of fantasy world. You are always waiting for something to happen. You have to live in the present, learn from the past and anticipate the future.

This was a book that was much more than I expected. I thought it was going to be a more fun book about someone dealing with aliens and what they wanted. What is was, was a deep story about finding a reason to live; and not just for Henry, but for everyone in his life. Every character was deep and could hold the story on their own. I enjoyed that the story was much deeper than I anticipated when I started it.

2 thoughts on “we are the ants – Shaun David Hutchinson- Review”