The theme of this episode was true love and the power that love can wield. This is a common theme in this show and one we have explored a number of different ways throughout the seasons. Most of the time during this episode I was wondering where everything was going but the pay off at the end was a new and interesting twist.

The episode opened with Snow having a dream/meeting with The Evil Queen. The Queen gives her a vial and tells Snow she has 12 hours to surrender her heart or The Evil Queen will destroy the town.

Turns out the vial is filled with water from the River of Souls. The water could decimate the town in no time. At this point Snow is losing hope for once. She can not see way to save her and Charming as well as save everyone in Storybrooke.

The Blue Fairy shares information about a possible weapon. It is a magic sapling that was created by true love. The true love we learn through flashbacks was actually Charming and Snow’s after their first real meeting. They find it but The Evil Queen destroys it right away.

The sapling storyline seemed pretty filler to me. I expected it to go somewhere but it died out right away. It appeared to be put in the show in order to tell us yet again that Snow and Charming are in love, have been in love for long time and have a love that has endured many trials. They are one of the main couples of the show, we know all of this and have been told it a number of times before. We really did not need the sapling goose chase to tell us that Charming and Snow are in love and that their love will win out in the end; we know that.

In the end Snow and Charming offer themselves to the The Evil Queen to save the town but she doesn’t kill them. What she does is put a sleeping curse on their shared heart. Which means that when one is awake the other will be under the curse. They can never be together again. 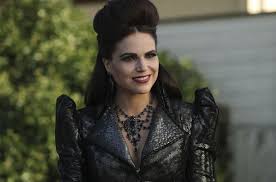 For a form of revenge this was a good idea. The Evil Queen wants Snow to suffer for what she did to her and her lover, Daniel. She wants her to feel the hurt and pain that she felt. Killing Snow would have been too easy and quick. Snow wouldn’t have suffered and The Evil Queen would only have felt satisfaction for a short time. This curse allows her to revel in Snow’s pain and feed off of it. This will bolster The Evil Queen for whatever other plans she may have.

The other aspect of this episode involved Rumple and Belle. Belle finds out that Rumple is hooking up with and helping The Evil Queen. She also finds out he has the shears and plans on using them on their son. She isn’t too bothered by his hook up with The Evil Queen. She is more upset about what he plans to do with the shears.

She tells him he can’t be in their son’s life right now. He has to earn their son’s future love. Right now he is forcing himself on them and that is not going to fly. Rumple confesses he is scared he is too weak to be good and Belle tells him he has to start trying. That is one thing Rumple fails at, trying.

He always wants a magical, quick solution to his problems. He never wants to work at anything. To prove he wasn’t weak he became The Dark One. He didn’t stick around to try to mend his relationship with his other son. Rumple is a weak man because he refuses to work for what he wants. If he can’t have someone else do it for him he won’t do it. Rumple needs to find a tougher side of himself and an independent side or else he will never get what he wants in life.

Quotes:
“If someone believe in you, you’re never alone.” – Blue Fairy- The group always has someone behind them. No one is alone in our group. Rumple on the other hand has no one who believes in him. He needs to find someone who does or else he will never succeed.

Questions:
How will they be able to break the sleeping curse on the hearts?
Will The Evil Queen do anything else now?
Is she going to take out the rest of the group somehow and let Snow suffer?
How is this all connected to Emma’s vision? Do we know the hooded figure?
When will we learn more about Charming’s father?
How will Agrabah play into all of this? What side is Zelena on now?
Can Rumple find the strength to be good?

Posted on November 12, 2016, in Once Upon a Time, Tv Shows and tagged Charming, Evil Queen, Heartless, Once Upon a time, review, Rumple, shared heart, Snow, tv show. Bookmark the permalink. Leave a comment.