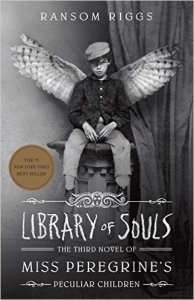 (This is a review for the third book in a series so there are minor spoilers for the previous two books.)

Library of Lost Souls is the final book in the Miss Peregrine’s series. I am always worried about final books. I worry that questions won’t get answered or something will be resolved but not in the fashion that I think works for the story. I am glad that this final book was not any of those things. This was a good way to end this series. The loose ends were wrapped up and the story came to a satisfying conclusion. I was not left wondering anything or upset at not knowing what had become of a character.

This final book finds Emma and Jacob having to travel through a dark time loop called Devil’s Acres in order to save their friends. They have to team up with some unsavory characters and make tough decision to save those they care about. They go on a fast-paced adventure to save their world.

Throughout this series Jacob was my favorite character. He started off the series as a naive kid. After his grandfather’s death he is told by his parents and doctors that he has gone crazy. For a short time he believes them, thinking his grandfather’s death has driven him out of his mind. But that doesn’t stop him from trying to find out the secret his grandfather left behind. He finds Miss Peregrine and the peculiar world and his life changes.

This last book was the wrap up of Jacob’s character transformation. In this book he keeps talking about two separate Jacobs. There was the “then,” Jacob and there is the “now,” Jacob. “Then,” Jacob lived in a straight forward world. People did not fly, no one was invisible and there were no monsters. Nothing extraordinary ever happened to him. “Then,” Jacob went to school, hung out with his one friend and spent time with his parents. His life was simple and normal.

“Now,” Jacob lives in a brand new world. All the things he thought were impossible are now possible. The word impossible doesn’t even have a true meaning to him anymore. This new world is one the requires him to be brave and couragous. He can’t rely on anyone else. He needs to make quick decisions and trust himself. He no longer can just sit around and wait for something to happen in life. In this last book it is up to him and Emma to save their friends. He had to grow up fast.

I liked this book because Jacob had to find a balance between the two sides of himself. He couldn’t let his old life intrude too much because then fear would take over. He wouldn’t be able to find his friends and fight to save not only their lives, but their world. He had to find a tougher side of himself.

On the other side though, he couldn’t let “now,” Jacob have full control. He had to remember how to have sympathy and how to be cautious. He couldn’t always act, sometime he had to let others take over. It was nice to see a character that did not go through a total trasnformation. Jacob retains parts of who he used to be and integrates them into this new version of himself.

Most of this book takes place in Devil’s Acres. This is a time loop where those who have been banished or ostracized from the peculiar world live. It is a dark and horrible place. I thought it was a proper place to end this series. This was a series that got darker as it went on and to end here felt right. I liked that this series showed the darker side of the world as well as the light. No matter the world there is always some dark aspect and in the end the dark and light create a balance. I liked this setting, it was interesting and I thought created the right mood for this final story.

I loved almost every aspect of this series. The characters were all unique and interesting. The inclusion of the photographs helped create an eerie and interesting atmosphere. I thought it was paced well, balancing the exposition with action. The only issue I had was the relationship between Emma and Jacob.

I did not think that Emma and Jacob needed to be romantic interests for each other. I felt like their relationship was forced in order to have some romance in the story. I did not feel any real connection between the two of them. I wish they had just become a very close friends.

I think sometimes people forget how powerful a close friendship can be. Romance is not the only way to show a deep connection between two people. And not every girl and boy who meet each other need to fall for one another. Sometime I wish that some of these characters would just become best friends. It would create a new dynamic and I think would have felt more natural for these two.

Despite my issue with that relationship I loved the rest of the series. It is a unique story, one full of adventure. I loved the world. The addition of the photographs gives it a unique feel. If you are looking for a bit dark, yet fun series I would highly recommend this one.

One thought on “Library of Lost Souls By: Ransom Riggs (Review)”