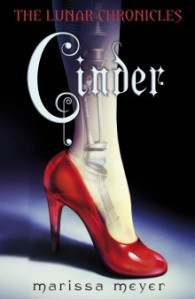 I have been putting off reading this series for a long time. I kept hearing about it through blogs and Booktubers but it hadn’t been finished yet. I have read too many series with disappointing endings that I was afraid this would fit that bill. But then the last book came out and all I heard was positive reviews about the way the series ends. So, I finally picked up the first book and I had trouble putting it down.

Cinder (first int the series) is a sci-fi retelling of Cinderella. Cinder is a cyborg who lives in a future society. She can’t remember any of her life before the age of eleven when she was made into a cyborg. She lives with her harsh and cruel stepmother and two stepsisters. One stepsister is actually very nice and loving towards Cinder. While the other is just as mean and cruel as her stepmother.

Cinder is a well-known mechanic and one day the prince (soon to be emperor) Kai comes to her to fix one of his androids. This one meeting changes everything about Cinder’s life. She learns about her past and gets caught up in an intergalactic problem that involves the Lunars, the people who live on the moon.

The story is fast paced, there is very little downtime between events. The characters are lively and relatable.

I loved Cinder’s character. She has a sarcastic attitude which is one of my favorite character types. Cinder has not had an easy life. She believes that her parents were killed in a crash that injured her so badly she had to become a cyborg. She has been an outcast her whole life. No one wants to be around her because of her cyborg nature. She is seen as less than human, which influences her view of herself.

I wrote a post about storylines that drive me nuts, one of those being a character hiding a part of themselves from someone else because they are afraid of what will happen if they tell their secret. Usually, this storyline makes little sense and makes the character holding the secret weaker as well as the other person. But in this story it was different and I didn’t hate how it was used.

Cinder is afraid to tell Kai that she is a cyborg. All her life people have looked down on her because of this condition that she had no control over. She did not choose to become a cyborg, that was a choice made for her. No one respects her. She is seen as less than human. So her holding onto that secret makes sense. This is how she views herself. She doesn’t see herself as worthy of affection or respect. She doesn’t understand Kai’s kindness towards her. She is sure that once he learns who she is, he will run. For this story, this all makes sense. I wanted her to tell Kai everything but I understood why she didn’t.

Both Kai and Cinder are thrown into an adult life. Both have to grow up fast. Kai has to rule his people, keep them safe and try to find a cure for a plague that is destroying their lives. Cinder is thrown into a new life that she isn’t sure how to navigate.

Their story doesn’t wrap up neatly in this book. Everything is left hanging and I loved that. I was worried that they would finish up their story, and only be side characters in the rest of the series with no more real growth or extension of their story. But that doesn’t happen. We are left wondering what will not only happen in their lives but between the two of them. It made me go right out and buy the next book. I am eager to see how not only does the story progress but what is in store for Cinder and Kai’s characters throughout the rest of the series.