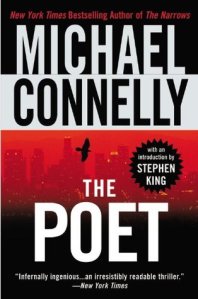 My uncle lent me The Poet by Michael Connelly because we were talking about how I like mystery stories. He told me this was one of the better detective novels he has read. At fist I had trouble figuring out what he saw in this story, it started out very slow. But once I got to about the halfway mark the story went from zero to sixty and I could not put it down. What at first appears to be a simple detective novel is much more. It is full of twists, turns and suspicion on every page.

Jack McEvoy’s is a reporter whose specialty is death. A specialty that takes on a whole new meaning after he takes the case of his brother’s apparent suicide.

Jack takes his case to the local PD and then to the FBI where they begin to investigate a serial killer. It is an investigation that brings out much more than any of those involved was hoping to find.
As I stated above the story started out pretty slow. Jack has to deal with his brother’s death. Then he begins to question things and has to find the evidence that proves his brother was murdered. That research leads into more investigation into similar cases. Much of the first portion of the story is him looking up everything, which can be a bit dry.

The momentum of the story picks up when Jack gets the FBI involved. The case is open and they hit the ground running. A cast of new characters shows up which adds much-needed conflicts. The investigation begins and with it a sense of something not being quite right also begins to plague the reader.

Connelly carefully crafts an air of suspicion around the story. Something feels off about one of the new characters and the circumstances that take place during the investigation. As I read I just could not place my finger on what was wrong.

Connelly does a great job of giving us characters to doubt but then pulling that doubt away. One of the detectives is harsh and unlikable for much of the story. But then Jack spends time alone with him and you learn there is more to him than we initially thought. The female leader and romantic interest doesn’t feel right either. She latches onto Jack quite quickly and I wondered why. But her interactions with Jack made her not seem all that bad when they were alone. Every time I thought I had it all figured out Connelly would throw a wrench into the mix and I would begin to question everything all over again.

By the time I got to the end I did not have any real idea of what was going on. I just knew that something was not right and I was eager to learn what it was. When the reveal came I was thrown off my feet. I had a lot of suspicions and thoughts and none of them matched what happened. I did not see the ending coming at all and I love that.

One of the reasons Connelly was able to keep the reader guessing until the very end was the way he incorporated chapters from one of the suspects points of view. We get a few chapters giving us an insight into what he was doing and why. He is a demented individual and he elicited no sympathy from me. I wanted him to be caught and taken down.

Not only did these chapters gives us an interesting look into this character’s mind but it also played a part as sort of red herring. We think he is the only culprit in this whole thing and that makes suspecting anyone else difficult. We know he is working alone, we know where he is and where everyone else is at the same time. I wanted to try to force pieces to fit with him but couldn’t.

It wasn’t until the end that you learn that he was only one piece of a much bigger puzzle. The way Connelly laser focuses our attention on that point but is doing so much more behind us is fantastic. It is like going to see an illusionist. They are showing you one thing, making you think that is all that counts but they are actually doing so much more just out of your eye line. Connelly does that with this story.

You realize with about 100 pages left that something is still coming but you have no real idea of what. I kept reading and flipping pages because I had to know what was truly happening. I loved the way that played out. It kept me intrigued and wrapped up in the story until the very end.

I also loved how the whole thing ultimately ended. There was no happy smiling ending. It ended exactly how I suspected this type of story to end. There are a lot of lives disrupted by the events and everyone involved isn’t going to be content and calm for a while. I am glad things weren’t forced into a happy-ever-after type ending. The story was twisted and tore apart a lot of lives during the course of its telling, giving us a more true look into what this type of life could actually be like.