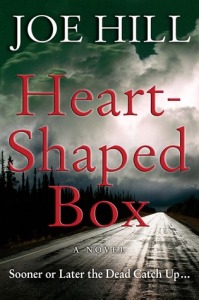 I am not what you would call a horror person. I do not generally enjoy being scared. I am the person who watches horror films through their fingers. Hell, I can’t even watch the commercials half the time. Halloween is my least favorite holiday, except for the free candy thing. I do not go to haunted houses, preferring not to spend an evening screaming and crying in fright. So picking up this book was a step outside of my comfort zone.

I have read one other book my Joe Hill, Horns. (Which I reviewed here). I initially read Horns because the movie looked interesting to me. I did not think of it as a horror story so I wasn’t that adverse to reading it.

I loved Horns, it was interesting and the one of those books I had trouble putting down. I then looked up Joe Hill’s other books and read some reviews. Many of the reviews stated that Heart-Shaped Box was one of his scarier books. I was hesitant at first to read this book. As I just stated I do not enjoy being scared. But I wanted to see if I could manage a horror book and I was pleasantly surprised that I enjoyed this story a lot. Yes, I did have to read most of it during the day but I found myself pulled in despite the horror elements.

Heart-Shaped Box is about Jude, a kind of death-metal rock musician. He was once part of a successful band but has gone solo because of many of the members of the band dying. He is now on his own and past his rockstar heyday. He fits the stereotype of the death-metal rock genre. He is interested in the macabre, which is why he buys a suit that is said to have a ghost attached to it. He doesn’t think twice about it.

It turns out that the sale was set up as revenge from the owner. He is out to get revenge on Jude for the death of his step-daughter. The ghost begins to haunt and try to kill Jude. Jude and his girlfriend have to run for their lives. As they run they learn there is much more to this haunting than what the auction site stated.

I have stated in a number of reviews is that characters are what draw me into stories. The plot is, of course, important but if I cannot form a connection with a character I tend to not be able to make it through a book.

At first, I was skeptical about Jude’s character. He starts the story as a selfish, almost heartless seeming man. He has a girlfriend but she is just one in a long line of women he has been with. He doesn’t even refer to them by their names, instead naming the women by the states they came from. He takes advantage of his assistant who basically hero-worships him. For the first few chapters, he isn’t a man that I would never spend more than an hour with. He feels like the kind of person you get a bad first impression of and then have trouble seeing past that impression.

But we learn quickly why Jude is this way. Jude grew up in an abusive home and has since had trouble forming any real connections to anyone in his life. Hill does give Jude one redeeming quality though, his care and love for his dogs. We see that while it appears that Jude has a cold heart, that is not entirely true. There is still something inside of him that can show care and love for something in his life.

Joe hill does a great job at setting up Jude’s character for the journey is going to start in this story. In the beginning, Jude appears to be a man who doesn’t seem to be living for anything or anyone. He seems dead inside.

Then the ghost enters his life. Jude is blamed for something that he did not do. But he did have a part in because of his standoff way of taking on life. He has to run for his life. Jude never truly fought for much in his life until this point. He learns that there are things in his life worth fighting for, that his  life itself is worth fighting for. The fight against the dead reawakens the life inside of Jude.

There are points throughout the story where Jude wonders if continuing to run and fight are worth it. The ghost torments him, trying to kill him. For a man who was floating along and just existing for much of his life, this is the journey that gives him a reason to live again. He opens his heart and life is breathed into him.

This was a page-turner story. You get caught up in the story wondering how Jude and his girlfriend are going to manage to get out of this predicament. You wonder where they are going to go next. How far are they going to run and how do you fight a ghost? The descriptions of the ghosts are chilling. There are points that send chills down your back which only heightens the suspense of the story. If you like horror with emotion, as well as  journey of self-discovery you will enjoy this book.