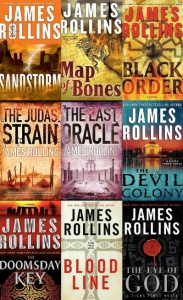 I’ve stated in previous reviews how my favorite type of characters are the ones who start out as the “villain,” and then have a transformation. I love the process of someone realizing their previous ways are hurtful and detrimental to the world and themselves. The process of fighting past a curtain of darkness to find the light on the other side is fascinating to me. Regina and Hook in “Once Upon a Time”, Jamie in “Game of Thrones” and, to a lesser extant, Daryl in “Walking Dead” are all characters who have had this type of transformation. Watching someone step back, and reevaluate themselves and their choices is always an interesting character arc to me.

James Rollins’s Sigma Force series is a fast paced action adventure series. It is a fun ride, that throws twists and turns at you with every flip of the page. All the characters are likable and have some fantastic qualities to them. Grey, Painter and Monk are all strong male characters who fight to maintain a fast paced life along with a family oriented one as well. The series is great because it also has some strong and great female characters. Lisa and Kat are two women who stand toe to toe with the men and many times come out on top. They can handle themselves. They stay in the thick of the action all the time, never settling for staying in the background and watching what happens. They aren’t just two operative though, Kat is a fierce and loving mother and Lisa loves and adores Painter.

My favorite of all the characters in the series is Seichan. Seichan is that character that started off as someone we did not trust or like. She worked for the shady Guild which was behind all the issues the team was dealing with. We never knew if she out for herself or was telling the truth.

I did not start this series from the very beginning. I started at “Judas Strain”, (I will go back one day to read the few that I missed) so I did not see Grey and Seichan’s first meeting. But I have learned from the summary of the other books that their first meeting was not a good one. Seichan actually shot Grey. This established her at first as someone we are supposed to be seen as a ruthless killer.

Seichan was part of The Guild. An organization that is full of secrecy. This organization cares about nothing but their own self preservation. They do not care about others lives. Seichan was raised inside this group so it is no wonder that she grew up to be cold, calculating and manipulative.

Seichan had a miserable childhood, one with little love or care. She never knew her father, always believing he was someone who just up and left her and her mother. Her mother was dragged away by force, leaving Seichan alone. She was adopted by this organization where she quickly learned that emotions were a weakness. Weakness was not tolerated and would never be a way to survive. That is how she saw the world for so long.

Then fate steps in and Seichan meets Grey and her world begins to change. In Judas Strain she goes to Grey for help. She shows up on the run and injured. He could have thrown her out but instead he helped her. Throughout that story she witnessed something else she had not seen for ages, pure love. She saw his concern for his parents and I believe it started to put a crack in her tough exterior.

Seichan really works hard for a time to deny the feelings she is starting to feel for Grey. She sees how much he cares about his parents and about his friends. She wants that. She wants to care again. She wants something beyond the world she knows. She leaves The Guild because she can’t work for their ruthless evil ways anymore. Even though she was raised to be a killer and has done some horrible things there is still a part of her that regrets those actions. Seichan is not a psychopath. She sees a different way of life and she wants that for herself.

She is scared though. It was drilled into her that weakness will get you killed. To survive you have to destroy those who oppose you. You have to fight everyone to stay on top. She believes herself nothing but a cold hearted killer. She doesn’t even know if she has the ability to care and love left inside of her anymore. But there is this spark that will not die.

In “Bloodline” she learns about her mother and that spark becomes a flame. She can still care. She can still love. Everything she knew has been turned upside down. She finds herself feeling lost and scared; emotions that she is not familiar with. She tries to do it all on her own but she quickly realizes she needs someone to lean on, and that person is Grey. She can’t do this all alone. She can’t fight all she has known without an outside hand to help her.

Rollins doesn’t have her falling in Grey’s arms right away though. This process of opening herself up to the good sides of herself is going to be a longer one. I love that it isn’t a snap of a finger deal. This seems much more realistic to me and when it all does come together it will be a stronger relationship. One that will keep Seichan on the right side. This evolution will be interesting to watch.