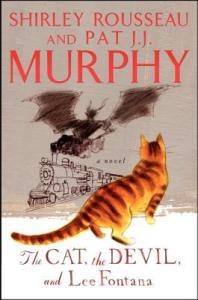 I read the synopsis for this story and was instantly intrigued. The idea of a ghost cat fighting the devil to save one man’s soul was different take on a common story. I thought it would be this epic battle between the two forces to save Lee Fontana. I envisioned the story centering more on the battle with the cat and the devil being the main characters. But that wasn’t quiet what it was about. It was more about Lee and his decisions. Though while it was a decent story that kept me interested it felt more like a set up for the sequel. Or it could have been compared to a very long prolong that just set up the background pieces and placed everything together.

The story is about a man named Lee Fontana who is in jail after getting caught during a bank robbery. He is just about to leave on parole and head to California where he has a job waiting on an old friend’s farm. Right before he leaves Satan makes his presence and purpose known to Lee.

Lee is the decedent of a man who messed up a deal with the devil. Now the devil is out to get every soul in his family line and Lee is the last of that line. What we get from the beginning is that Satan desperately wants to complete his task. Though he does not fight nearly as hard as I thought he should have fought.

From the moment Lee gets out of jail and makes his way to California he is planning his last robbery. What Lee wants to do is get enough money to run to Mexico where he can live out the rest of his life.

Along for the ride with Lee is a ghost cat named Misto. Misto is a sort of spirit guide for Lee. His job is to keep Lee from allowing Satan to win and take his soul. He needs to make sure that Lee doesn’t falter and make a mistake that will cost him his soul. This is the point in the story where I got lost and a bit confused.

Lee is not a perfect soul, obviously. He is a bank and train robber and he is leaving jail, so his soul is already in a precarious position. Lee’s initial plan is to rob the main owner of the operation his friend Jake’s farm is part of. He plans to steal the payroll, run off and leave his friend in trouble and those around him without their pay. Misto balks at the idea and tells Lee that is the last thing he should do.

Satan on the other hand is encouraging him to screw over his friend. Misto reminds Lee that Jake is someone he considers a friend. Jake is quite possibly the only person who trusts him and who he has any real relationship with anymore. Misto tells him that the last way to repay the friendship is to steal from him. He encourages Lee to rethink his plan and not hurt someone he cares about. Lee realizes that the cat has a point and change his plan.

Lee does not say he will not rob anyone. He does not make a decision to become a better person and not hurt anybody. He decides that he will not steal from a friend. Instead he changes his plan to rob the bank in town, robbing many more people of the money they desperately need. The cat guide does not object to this plan at all. He purrs contently by Lee’s side as he makes arrangements and sets everything up.

What I do not understand is how this is any better then stealing from Jake? The premise of the novel is that Lee’s soul is on the line. He needs to keep himself from going to the dark side. To me that would mean not stealing from anyone, period. Why does Satan not do a tap dance when Lee goes through with his plan? Is stealing not enough for him to lose his soul? But it would be enough if he stole from someone he considered a friend? I read to the last page mainly because I wanted some explanation of why he was allowed to rob the bank and that would not jeopardize his soul. I never got a satisfactory answer.

There is a sequel to this novel and as I stated earlier this story felt like the setup for that sequel. The side plot of this novel was about a small family who have a daughter that has visions. She sees her father jailed for a crime he did not commit. She also sees her father being helped by a man she calls, “the cowboy,” which we are lead to assume is Lee Fontana.

I hope the sequel answers the question of why one robbery is not as bad as the other. Is the bank robbery not hurting Lee’s soul because it sets him up to help this family? Will somehow proving the father’s innocence save his soul and negate all the other things he has done is in his life? I really want the sequel to make it clear that certain things happen in order for other events to take place. Lee had to rob the bank in order to save the family. I had a lot of questions after this novel and I really hope the sequel answers them for me.