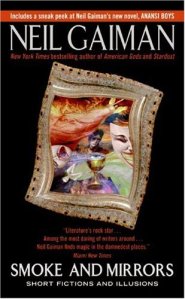 Neil Gaiman has a somewhat dark and twisted way of looking at the world. He doesn’t write stories where it is easy to pick out the lesson or main idea. He doesn’t write stories where every reader is going to take the same thing away. This is one of the reasons I like his stories so much. He lets the reader interpret the story and decide what the characters decisions could ultimately mean. His collection of short stories “Smoke and Mirrors,” highlights this idea well.

As the title states the theme that runs through these stories is that reality can be and often is warped around us. What you see is not always what you get. The most obvious explanation is not generally the truth. His stories make you think twice about what you are reading. You begin to second guess everything you read and every character you meet. You wonder what their true motivation may be and if they are hiding something from the reader. His stories make you look deeper then the surface.

One of my favorite stories was “Murder Mysteries.” The story begins innocently enough with a man stuck in Los Angles when storms in England prevent him from flying home. There is little indication that anything bizarre is going to occur. But, as in many of Gaiman’s stories, there is this, “hold your breath,” waiting period. You are waiting for the moment when what you think is happening is going to be twisted around to reveal something out of the ordinary.

The man takes a late night walk and ends up sharing a cigarette with a stranger. In payment for the cigarette the stranger offers to tell the man a story. He tells him a tale of angels, a murder and the set up of the pieces that will create the present day universe. It is a story that holds the protagonist captive as well as the reader. We want to know who killed the angel and why. We are astounded to find out how the whole thing was a set-up to place the pieces for Lucifer’s fall.

The end is the point where the reader is left to make an interpretation of their own. It ends with the man on a plane on his way home. He reads about a grisly triple murder, one that sounds like it involves the people he was with before he met the stranger. You are left wondering who the stranger was. Was he the angel from the story? Was he crazy? Did he do something to our main character in order to continue his job as a vengeance bringer? Or did he let him off the hook for any crime he may have committed? Gaiman doesn’t state out right what he wants the reader to take away from the story. You are left intrigued and curious. It is up to you to look beyond the smoke and decide what the story was meant to tell you. Gaiman allows his readers to instill a part of themselves in the tale and take away what they deem is important.

The other story I really liked was, “We Can Get That for You Wholesale.” It is yet another story that appears to start out innocent. A man finds out his girlfriend is cheating on him. He goes looking for a way to punish her and decides to see if he can find an assassin to do the job. He ends up finding a company via the yellow pages.

One of the best parts of Gaiman’s writing is the way he puts these seemingly outlandish pieces into his story. We should be surprised and questioning why someone would advertise being an assassin in the yellow pages. But our protagonist passes it off and accepts it easily and in turn we do the same. He doesn’t wonder about it over and over. He doesn’t question it. He accepts it and moves and so must we as readers.

What is great about this story is the way it escalates. At first the man just wants his ex-girlfriend and the man she cheated with dead. But the man he meets with from the company keeps offering him a better deal. If he has more and more people taken out it gets cheaper and cheaper for the man.

It is a bit of dark humor. We kind of laugh as the man starts making lists of people he hates. He forces reasons why he wouldn’t mind that they die; just so he can take advantage of the deal. The reason this works so well is because we all can relate to the idea, granted on a much lesser scale.

We all have heard of a deal and thought, “Well I can’t pass that up!” You are shopping online and if you add just one more item you get free shipping. Though many times that item is actually more expensive then the shipping itself would have been. We all are guilty of hearing a deal and wanting to make sure we don’t walk away from a fantastic bargain. No one wants to be that person who “lost,” money.

The idea here is to always look beyond the surface. The man doesn’t realize what he is doing. In the end he is the reason it would appear that this company is now going to take out the world. He allowed this to happen because he didn’t stop and try to see what was beyond the smoke screen of the fancy words and bargains. I loved this story because it was fun to read and it left you wondering at the end. It left you wondering if he had just questioned the whole thing once what could have happened.

This collection not only had short stories but some poems as well. There is a type of writing for everyone inside these pages. Gaiman also provided an explanation for where the inspiration for each story came from. I enjoyed this as well, it is always nice to see where some of these ideas spring from. As a reader I got immersed in each story. I read them wondering what may be beyond what I initially perceived and that made the stories fun and intriguing to read.