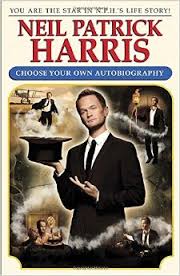 I am not someone who obsesses over celebrities and their lives. I have a handful that I do like and I will read articles about when I come across them. I am also not a huge non-fiction fan. I read to escape which is why I love fantasy and science fiction. I generally don’t want to deal with real life when I read just because I live it everyday. But when I heard that Neil Patrick Harris was putting out an autobiography and it was going to be a “Choose your own…,” I was eager to read it.

First of all I love NPH. He is one of my absolute favorites because he just seems like such a nice person who is also funny and seemingly down to earth. Second I absolutely love the “Choose your own…,” novel idea. (My NaNoWriMo novel I am doing this month is actually a “Chose your own adventure,” story). So when I saw that this was how he was going to publish his autobiography I knew I had to get my hands on it. I knew it was going to be a fun and interesting read about his life; and I thankfully was not wrong.

Interspaced with the obviously wrong and outlandish possibilities that he life could have taken; such as him and his husband David outrunning paparazzi in a white ford bronco or him slowly dying in an avalanche or quicksand and also the three different magic tricks that he teaches you, you get these very sweet poignant stories that really give you a better idea of who this man is. As you read you find out different parts of his life in a variety of ways depending on what pages you choose to go to next. We get to see him struggle with his sexuality, trying to figure out what it mean to be gay and how to navigate his world while figuring this out. We see him fall in love and see him create a family with his husband. We also get to see him throughout his whole career and what he learned from all his variety of experiences from made for tv movies to hit shows like HIMYM.

There was one story that was told that really stuck with me as I read through the rest of the book. When I think of someone like NPH I assume that when they go into a project they are fully prepared and give it their all. I assume that they are ready to be fantastic at what they do and that is comes easy for them. I was pleasantly surprised to see that this is not always the case.
While filming HIMYM he decided to take a role in a limited-run, staged reading of the musical Company. He arrives at the first rehearsal assuming that this was the point where everyone would be learning lines and songs. He walks in to learn that everyone is off-book except for him. Everyone has their parts down and he walks in completely unprepared. He struggles to learn everything as they rehearse and is constantly freaking out about it.

He knows he is not doing the best work can do and it is driving him crazy. He even gets told off by Patti LuPone when he complains that he will not get the play down, that he is failing and that her remarks aren’t helping him. She tells him “Don’t put this on me.This is your thing…,” (189).

He gives the first performance stating that it went “okay,” which is “absolutely not okay.” (190). Here we see someone who many think have some type of magic wand and can succeed well whenever they want. It is rare to associate someone like NPH with the idea of being a bit full of himself. He is always joking about his life and he does that consistently throughout the book. I never would have thought of him as someone who would show up to a project unprepared and to have to work extremely hard to just be okay. (Though I do also love that he says that the performance going okay was not okay. It shows that he holds himself and his work to a higher standard and he will not accept less from himself).

This little story was refreshing because we get to see that though our culture puts celebrities up on pedestals; they don’t actually belong up there. Just like anyone else they make mistakes, they assume things that are not true and they can fail at what they are seen for being fantastic at. NPH made an assumption here and it backfired on him. (And he is willing to relate this story and admit his failings). We see that he has to work just as hard as anyone else at every single thing he does to continue to be successful. He tells stories like these throughout the book that bring him down to our level and humanizes him for the readers.

I enjoyed reading NPH’s autobiography because I have always loved his work and him as a person and this made me love him more. I got a glimpse into his life that while sometimes was serious was always fun to read. I never felt like I was being shoved a lesson about his life or being forced to feel one way or another about him. He told his life just as we see him in interviews in a humorous and compelling way.