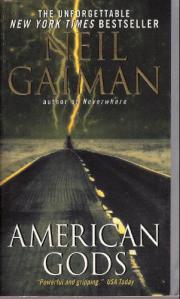 Shadow is a man who gets out of prison only to discover the life he had planned on is no longer remotely possible. He finds out his wife and best friend are dead. His entire life comes crumbling down and is in a pile at his feet. While he is traveling to attend his wife’s funeral, as well as to try to figure out what to do with his life now, he meets Mr. Wednesday. After agreeing to help Wednesday he is pulled into the preparations for a coming battle between the old world gods and the new world gods.

American Gods appealed to me because of the overall concept of the story. Any time anyone takes the idea of gods or mythology and gives it a modern twist I am instantly interested. Many of us know the stories of the gods well. We know the personalities they were supposed to have and we all have a similar pictures of who these gods were in the past. They are generally depicted as these intangible creatures. Yes, they interact with humans but they are never really on our level. They are all powerful while we are lowly humans that do their bidding because our lives are run by them and only them. Neil Gaiman takes these gods and humanizes them. We as reader cannot only relate to them but we begin to sympathize with them as well. As I read I felt sad for most of these once powerful beings.

One of my favorites parts of this story was how it was explained why these old gods are fading and why they need to take part in this battle. When all the immigrants who made this country came over they brought their gods with them. It was their connection to where they had come from. They brought them because they gave them comfort and helped them feel like they weren’t just floating along in the universe.

That first initial generation held onto their beliefs very strongly. They tried to honor them and also tried to pass their stories on to the next generation. But this was no easy task. They become surrounded by a number of new cultures and beliefs and all the gods begin having to compete with each other for followers.

Throughout the novel we get those small looks at these people who brought their gods to this world. We also get a glimpse of what the gods were like when they were initially brought over. We see how much life changes for them and get to watch as they all struggle to somehow make their old ways coincide with the new world ways. These small vignettes give us a better look at what Mr. Wednesday tries to constantly explain to Shadow.

America is a nation of a number of cultures, all with their own beliefs, rituals and traditions. When they all combine it becomes a struggle to survive and a struggle to find a way to define themselves. Mr. Wednesday tells Shadow that, “This is the only country in the world….that worries about what it is,” (pg 105). It is extremely difficult to find a way to define yourself when you have so many different view points living in one area. In the old world they are defined because it has been that way for so long.

Gaiman gives us a glimpse into how religion really works in this novel. A true religion thrives off of having a number of people worshipping at its alters. The old gods need hundreds of prayers and sacrifices. But when you have a bombardment of ideas and beliefs it becomes almost impossible to prescribe to one idea and one idea only.

There is a great passage on pages 348-349 (in my tenth anniversary copy that is) where the character Sam (a hitchhiker) tells Shadows what exactly she believes in. It is a mess. Her beliefs are constantly contradicting themselves over and over again. “I believe in a woman’s right to choose, a baby’s right to live, while life is sacred there is nothing wrong with the death penalty if you can trust the legal system implicitly and that no one but a moron would ever trust the legal system,” (pg 349). This whole passage illustrates perfectly what these old gods are now facing. Even the new ones aren’t able to live as long as their counterparts have before. People have too many choices nowadays and choosing one belief system or thought process is extremely difficult, if not impossible. In the old times there were strict rules and rituals. Life revolved around making sure that you made it until the next day and didn’t catch some deadly disease or end up on the wrong side of the law. Those people were given a very small amount of choices because they had little time left to them.

Our world today is much more hectic and we live much longer. We have time on our hands to actually look at the world around us and question everything. The old world did not question like we question today. Gaiman wrote this ten years ago and the theme is even stronger today. Wednesday wants to rally all the old gods  together to fight the new because he doesn’t want to fade away. He doesn’t want to be forgotten but being forgotten and replaced is inevitable.

Neil Gaiman shows us how indistinguishable the old gods are from the people we see on the street everyday. Yes, some of them still possess some power but not anything truly significant. Many still believe in the life they used to live and the principals they live by. But now they had to adapt and have to live side by side with normal human beings. Gaiman creates these very vivid and breathing people who just want to survive. I love how he makes them so tangible to the reader. These gods (some I knew, some I did not know) are no longer those larger than life people who control the world. They are now at our level. We possess the power now. Humans decide if these once all powerful beings live or die. This is a unique take on a concept we really don’t give much thought to nowadays.

I have heard that this is one book that either people loved or hated. I happen to be in the loved category. Yes, the end seemed at first kind of anticlimactic but after I thought about it, it made sense to me. I felt like it ended exactly how this situation should have ended. There was a bit of a drag tying up a few loose ends but I still ended up satisfied.

As I have stated in reviews before I love developed characters that have extreme depth and this book gave me that beautifully. We see Shadow shift from a man who is just floating along because he has no idea what else to do, to a man who actually opens his eyes to the world around him and begins seeing it as it is. Shadow begins living for himself and only himself. I love how much depth these gods had. They aren’t just one dimensional beings that are set fully on only one thing, such as war or love. Those aspects just amplify who they already are. I highly recommend this book to anyone who wants a new way to think about America and religion as well as anyone who loves a story with well written living and breathing characters.