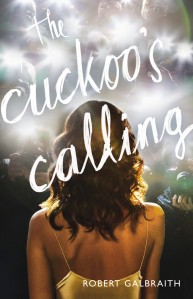 I picked up The Cuckoo’s Calling because I love J.K. Rowling. As soon as I heard of her “secret” book I knew I had to read it. She is that one author I will read anything from, no matter the subject matter or style of writing.

Traditional detective novels have never been my favorite genre of books. I enjoy the mystery of the detective books but I generally find myself bored by the process. Unless there is some supernatural element or item of intrigue they are hunting for, I generally stay away from this genre. But this was a book by J.K.Rowling and I knew I had to give it a shot. I was not disappointed by how entertained I was by the story. Like her other adult novel Casual Vacancy (also very good) this is more a story of getting into the depths of the two main characters, Strike and Robin than just a mystery novel.

Strike is a down and out detective on the verge of complete financial and personal ruin. Robin is a newly engaged temp who is assigned to be his secretary for a week. We become entangled in the lives of these two characters. Entangled in the ways they interact with one another, and those around them all while trying to get into the deep depths of Lula Laundry’s life and how she ended up in her grave.

Strike  takes the case of further investigating Lula Laundry’s, a famous model’s, apparent suicide. A suicide her brother believes is actually murder. Strike takes the case more for the money than anything else. He has no real choice in the matter. While Robin is ultimately only assigned to help Strike for a week she sticks around, wanting to not only find the solution to this mystery but also to get closer to Strike and help him get back up onto his feet.

The investigation itself is very realistic. Rowling isn’t stingy on the details of the interviews and the process Strike has to go through to find who actually killed Lula. As you read you actually feel as if you are a detective, hunting down small pieces trying to make a bigger picture. She never tells you when something is important, never has Strike run off to write something down or hurriedly hunt through files, signifying something important has happened. You as the reader pick on the subtle aspects of what the characters say and do and you begin to realize, like Strike, the truth behind this mystery.

Lula Laundry’s life mirrors Strike’s in so many aspects it gets a little bit scary for Strike. He sees himself in this case, he sees how far he could fall and what the end result could be. Though Lula doesn’t actually commit suicide, Strike sees how she could have ended up in that place. We as readers watch as he investigates this young woman’s life and we see Strike become more and more frightened yet intrigued. He has to find the answer, not only for Lula but for himself. We follow him from his lowest point in life and watch as he begins the climb up to a stable place. Rowling writes this parallel so well, holding onto the reader.

Strike is actually a very smart man, one who understands his surroundings and lives very much in the reality of his current predicament. Whereas Robin is initially more idealistic, she’s on the way to getting married to the love of her life and on the verge of finding a job to finance her new future. When she comes to Strike she has a very romantic idea of what a detective should be like and how the life should be. While we meet Strike at his lowest, we meet Robin at her highest.

We follow Strike as he begins to move up and we watch as Robin begins to become more realistic. She doesn’t fall, but she quickly realizes what reality is really like. She sticks around, intrigued not only by the case but by Strike. She wants to help him, she wants to watch him get back onto his feet. They become close, not romantically, but in a friendship that is real and strong. Both are reluctant to let the other in at first but quickly learn that they have to help one another, they become compliments for each other.

The culprit of the case is not exactly shocking, it is more the reason why they did it that makes you drop your jaw a little. The end gives us a solution to the case and hope for Strike and Robin. Strike is getting control of his life while Robin is now on the course of beginning to live the life she truly always dreamed of.

J.K. Rowling wrote characters in Harry Potter that were vivid and real, characters we could all get close to. They had true depth and lives that we became involved in, we didn’t want to watch them suffer but we rejoiced when they finally triumphed. That aspect of her writing was and always will be her strongest aspect. She writes these characters we become invested in, we want them to succeed and find themselves. We don’t want them to suffer but we understand why they have to, we see why they have to struggle. Cuckoo’s Calling shows us yet again why J.K. Rowling will be an author studied and adored for centuries to come.