A/N: This is an excerpt from a novel I am working on. These are the secondary villains I guess you would call them. They are the problem no one has time to deal with during the time line of the novel. A mistake they will sorely regret in future books.

The Leader pulled the group through dense forests and over high hills, past small creeks and over huge oceans. He pulled them left, right and then turned around and backtracked hundreds of feet. He could smell the joy, the life and the hope. The scent intrigued him, made his mouth water, now he just had to find it.

After a few more wrong turns and dead ends, he found it. Just beyond a small clearing was tastiest, most delectable village. The trees were alive with green and yellow foliage. Bright pink and red flowers bloomed heavy on the branches. Birds twittered as they watched  squirrels chase each other over and under the tree limbs.  Laughter and shouts from the village wafted through the thin barrier of bright and vibrant green shrubbery. No one could see them but soon they would sense them.

“Fast or slow?” a voice asked him. He could feel the jittery twitch flowing through their form. He wanted to shout, “Go out and devour!” and then watch as their black cloud swelled. He wanted to sit back and watch as the people’s tall, proud forms slumped and fell. He wanted to watch as the town went from a vibrant community to the walking dead in a matter of seconds.  This was his first act as leader of the group though; it needed to be remembered for eons to come, so slow it would be.

“Slow. Pull the colors from the trees and shrubs. Kill the grass; silence the birds and chattering squirrels and chipmunks. Pull the clouds over the sun, casting shadows over every living space. Make them cower; make them see the gloom that is coming for them. Let them stew in the fact that there isn’t a thing they can do about it,” he heard the hum of satisfaction race through the group. “Then pull every hope, dream and ounce of joy from them. Leave the villagers sniveling husks, wondering what went wrong.” 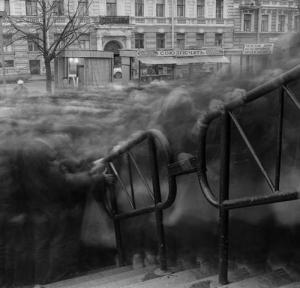 As soon as the last word had left his mouth, he felt the movement around him. He felt the tugs to the left, right, and center as the collective swarmed forward. With a satisfied sigh, he settled back in the remaining shadow and watched the show. He watched as the green leaves faded to grey and brown and fell from the branches as dried husks mingling into the dead brown grass below. The bright flowers dimmed and slowly shriveled up until they were nothing but debris. The bare branches sagged, no longer concealing The Shadows from view. No one shouted or ran for cover. Each inhabitant averted his or her eyes as if to say, “If I can’t see you, you aren’t real.”  Once the outer line of the forest was dead, the group pulled back for a moment savoring their appetizer.

Once the sweet tang had faded, they swarmed forward once again. With a tug, they silenced each owl, sparrow and robin. The clicking insects and whispering winds went silent. The world was deathly quiet, no longer beckoning the world to smile or laugh. People grimaced and vigorously shook their heads trying desperately to reinstate some semblance of sound. Some grabbed hands of friends or children and pulled them inside; probably thinking sturdy walls could protect them. Naiveté would be their demise.

For the few who continued with their day, the disappearance of the sun was the last straw. One second the air was warm and the area was awash with light, keeping the dark at bay; the next second dark black clouds rolled in and the light became nothing but a distant memory. The warmth evaporated leaving nothing but a chill rolling down the few remaining spines. There were a few brave souls (or more likely naïve ones) who remained outside. Their eyes scanned the area, desperately searching for an explanation. The Leader knew they were looking for the hidden cause, the broken switch they could flip and restore everything to the way it had been moments before. Once they realized there was no solution, that there was no way to fix any of this, they sidled inside to hide with the rest of the village

Once every person was gone, safely hidden away, The Leader pulled the group back and laughed. He laughed loud and long, reveling in the power he wielded and the destruction he stood before. With only a few tugs and gulps, he had made an entire village run for cover. Now he controlled them. One minute they were laughing and smiling without a worry, the next they were cowering behind wooden doors terrified of the outside world.

His finally stopped laughing, he felt his jittering excitement extend throughout the group. The appetizer had been delicious, the main course was delectable but dessert was going to be perfect. Something they would revel in for days to come. Something to remember next time they had empty stomachs.

“Go,” he hissed. He held back once more, letting the black mass hunt out each beating heart. He was the anchor, holding them in place, waiting for the gush of juicy joy. They surrounded the huts and began to pull; he savored each ounce of sweet joy, tangy laughter, and savory dream. It was like consuming heaven itself, utterly divine. He relaxed as his long inadequately filled stomach grew.  This was how life should be there was no stopping them. They, The Shadows, would always be present, always ready to consume that spark of life left unguarded.

Posted on December 30, 2012, in Excerpts from novels in progress and tagged destruction, excerpt, fright, horror, Shadows. Bookmark the permalink. Leave a comment.